A guided visit to the heart of Le Cheylard forest, headed by forestry expert Frédéric Lejuez, provided a great opportunity to explore this exceptional woodland. Now owned by the forest group managed by France Valley (a national investment fund), the Forest of Le Cheylard is an even-aged Douglas stand which has been remarkably well maintained over its fifty-year lifetime. Forêt Investissement, represented by Adrien Sébastiao, Simon Coudon and its copywriter Stéphanie Bonnet were keen to show this 500-year massif to their Quebec-based partner, Julien Moreau.

A very spring-like Thursday, March 30 was ideal for a trip out to the north of Ardèche. Forêt Investissement took the opportunity to show Julien Moreau, a forestry consultant from Quebec, around this 50-year-old even-aged Douglas fir stand. A forest that probably appears pretty old to our cousin from Quebec as he is only familiar with the very young Canadian forests. Our forest heritage works to a different timescale from one continent to another.

The outstanding Le Cheylard massif can trace its history back to the last century. At the turn of the 20th century, the Ardèche département was mainly agricultural and industrial, with an afforestation rate of just 18%. That has since risen to 56% and Ardèche is now the fifth most wooded département in France. The Ardèche forest is thus recent and has developed through silvicultural techniques based on wise, even bold choices if we look back 50 years.

Fifty years: the age of the Forest of Le Cheylard, which was created from scratch by a family of industrialists from the upper Eyrieux valley. In the 1960s, Douglas fir was the natural choice but still surprising as it had never been seen in the sector before. It was a wise choice, determined by the right soil type and good exposure, combined with excellent forestry management over the years, until five estates were sold to an investment fund – France Valley – in 2016. This investment fund is managed by Guillaume Toussaint and Arnaud Filhol, who have set up a forestry group. With an eye to regular production, the forestry management is entrusted to Forêt Evolution and Frédéric Lejuez, a forestry consultant who works across southern France and who has regulated regeneration in the massif extremely well.

This even-aged stand of Douglas fir planted between 1962 and 1968 has come to the transitional point between generations. Felling work is now required to sell the timber. The average height is 38 meters tall, though some trees reach up to 50 meters, and the quality is excellent. Destined for first-grade carpentry, with stands of pruned trunks that will provide quality wood for joinery at around 70 years of age. The exceptional potential volumes of Douglas fir available on the estate (estimated at 100,000 m3) means the owners of the Forest of Le Cheylard will become one of the main suppliers of Douglas of this quality in the Rhône-Alpes-Auvergne region for several years. 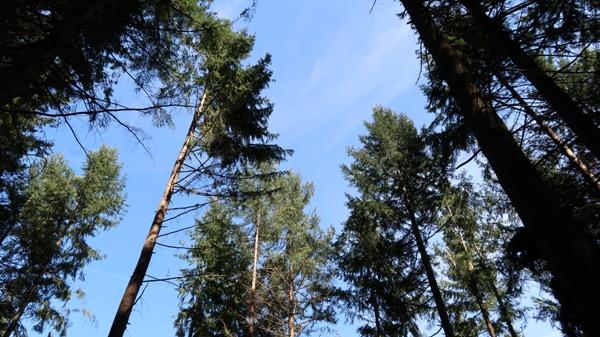 With its exemplary silvicultural management and good maintenance of the tracks, which are accessible to logging vehicles, the trees in Le Cheylard forest sell very well.

Proof that forestry is possible in the mountains, as long as the tracks are well maintained and drivers of the various vehicles are highly skilled! Frédéric Lejuez’s aim is supply 240 trucks of logs a year (one truck per working day) to generate regular profits from the forest. This is perfectly feasible while gradually renewing the resource to maintain this rhythm over the long term.

When he took over management of Le Cheylard, Lejuez set himself three goals: producing quality lumber, making its resources sustainable, and remunerating the capital invested in the forest. Three ambitious but attainable goals if a stringent silvicultural approach is applied, something that this very driven forestry consultant is perfectly capable of doing.