From the Verghellu forest to that of Bonifatu, along with the forests of Ersa, Aïtone, Bavella and Tartagine, and those of Pinia, Marmano and Ospedale, there are some remarkable woodlands all across the island.

Corsica is very popular with tourists, especially in summer, and appreciated for its fine sandy beaches and turquoise waters, and the contrasting play of colors with the forest at the heart of this island landscape. The region is renowned for this greenery and hikers are in for a treat with a series of paths, which can be dizzyingly steep at times!

Corsica, the most heavily forested region in France!

Advantages for developing a quality forest

With a Mediterranean climate, here we find typically southern species, but in the center of the island the mountain climate harbors conifers and beech trees in the splendid public forests like Aïtone, Valdu-Niellu, Asco, Vizzavona and Sorba-Marmano.

Here, the sunshine, generous light, summer drought, plus the autumn and spring rains are are all highly conducive to tree growth. The island enjoys plentiful rainfall and average temperatures ranging from 15° at 300 m and 1.5° at higher altitudes.

Despite its excellent afforestation rate, the Corsican forest region is not necessarily the best exploited in France. Difficulty of access greatly limits the use of logging equipment on forest plots.

There is not therefore a well-developed wood sector and the low level of industrialization does not create many jobs. Meanwhile, cork oak operations or chestnut harvesting remain traditional family activities.

In fact, the cork oak forests once played a key role in the local economy but are now largely neglected by their owners because there are fewer outlets for their product.

The forest in Corsica has been gaining ground in recent years with the decline in agriculture, but as far as we can see, it is being better exploited. Corsica is steep and mountainous and the beautiful Corsican pine plantations lie at altitudes where logging is far from easy. 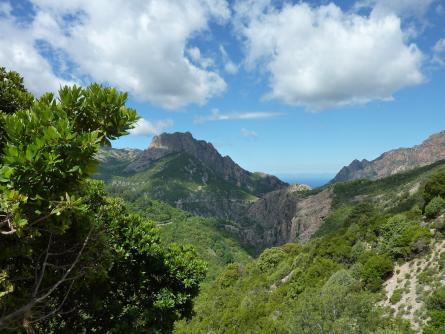 However, there are benefits in that mountain forests play a very important role in ensuring soil stability and maintaining water regimes. The high altitude Corsican pine forests provide remarkable cover and on hot summer days, the shade is much appreciated.

Deciduous species dominate in the forest region of Corsica

The Corsican forest is dominated by deciduous species. They occupy 79% of the production forest’s surface area. Holm oak is the predominant species, along with beech, even at high altitudes. Cork oak has long been established here, as has the chestnut tree, which is found exclusively in Castagniccia.

In the private forest, the chestnut tree covers more than 20,000 hectares, spread across the whole of Corsica. It is the fourth most significant forest species on the island.

Otherwise, deciduous are concentrated along the coast and at low altitudes. However, there are a few deciduous mountain forests (beech and chestnut). 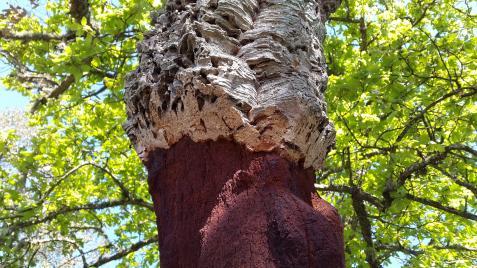 In the central mountains, we find Corsican pine, fir and beech. In the bas-maquis, the holm oak is found mixed with other Corsican species. Cork oak is mainly found in the Porto-Vecchio region.

The decline in agricultural and stock-raising activities and the development of extensive livestock farming have contributed to this forest growth.

Inventory of the private forest in Corsica

The private forest historically lies at low altitude in Corsica’s forest region. How the forest is distributed between the low-lying areas and higher altitudes is found in the island’s history. Because he wanted to create a large and impressive fleet of ships for the island, Pascal Paoli, leader of the independent Corsican nation in the 18th century, exploited the Corsican pine stands, whose tall straight trunks were perfect for ship-building. Those high altitude forests, with their Corsican pines, fell into public ownership when Corsica was annexed to France.

The French forestry board (ONF) thus manages 31 territorial forests, 131 communal forests, the Pinia massif, which belongs to the coastal conservatory, and the Conca departmental forest. 27% of the island's forest areas are therefore publicly managed. They include the rich Corsican pine stands.

Chestnut in the private forest:

The chestnut covers about 20,000 ha. It is the fourth most significant forest species on the island. Most of the stands are found in Haute-Corse, in the micro-region of Castaginccia (9,000 ha).

Holm oak in the private forest

Holm oak is a dominant Corsican species in private forests, and is mainly used for firewood but also for parquet flooring.

Exploitation is declining and is mainly left to family estates keen to maintain the tradition.

Corsica’s private forest is very fragmented and remains difficult to exploit. 69,000 owners share 108,000 hectares with property sizes ranging from 1 to 10 hectares. Exploitation is limited by this fragmentation and cases of joint ownership.

The forest in Corsica occupies predominant areas of the landscape and helps shape the island’s beauty. The large public forests receive much attention because they are remarkable, harboring considerable biological and ecological diversity. The tourism that has developed around these forests has taken on-board this need for protection. The forest in Corsica is difficult to exploit but because it is so well preserved, it is simply spectacular.

Share on
Print
Written by Stéphanie Bonnet
See all their articles

Buying a forest in France: The main forest regions in France

Forest for sale in Gers