The coastal forest stretches along the Canadian Pacific coast, majestically bordering its beaches. The coastal rainforest thrives at sea level just 900 meters from the shore and is considered by many as the very essence of Canada.

Coastal rainforest is found in different parts of the world, such as South America, Europe, Asia, Australia and New Zealand, and features prominently in North America too. Canada boasts 70,000 km² of this type of forest, exclusively in British Colombia.

It is worth pointing out that 25% of the world’s temperate rainforest is found in the province.

Another good thing for anyone looking to buy a forest in British Colombia: almost one third of global oxygen production comes from rainforest vegetation. Here, dense vegetation thrives thanks to high precipitation and humidity levels combined with the snowmelt from the mountains in spring.

The resulting landscape is one of ancient forests with colossal trees of flamboyant green, dotted with wetlands and crisscrossed with rivers that run to the sea. The countless lakes add a touch of blue in the ocean of greenery.

Buying a forest in British Colombia is tempting because the biggest trees in Canada grow here, particularly in the 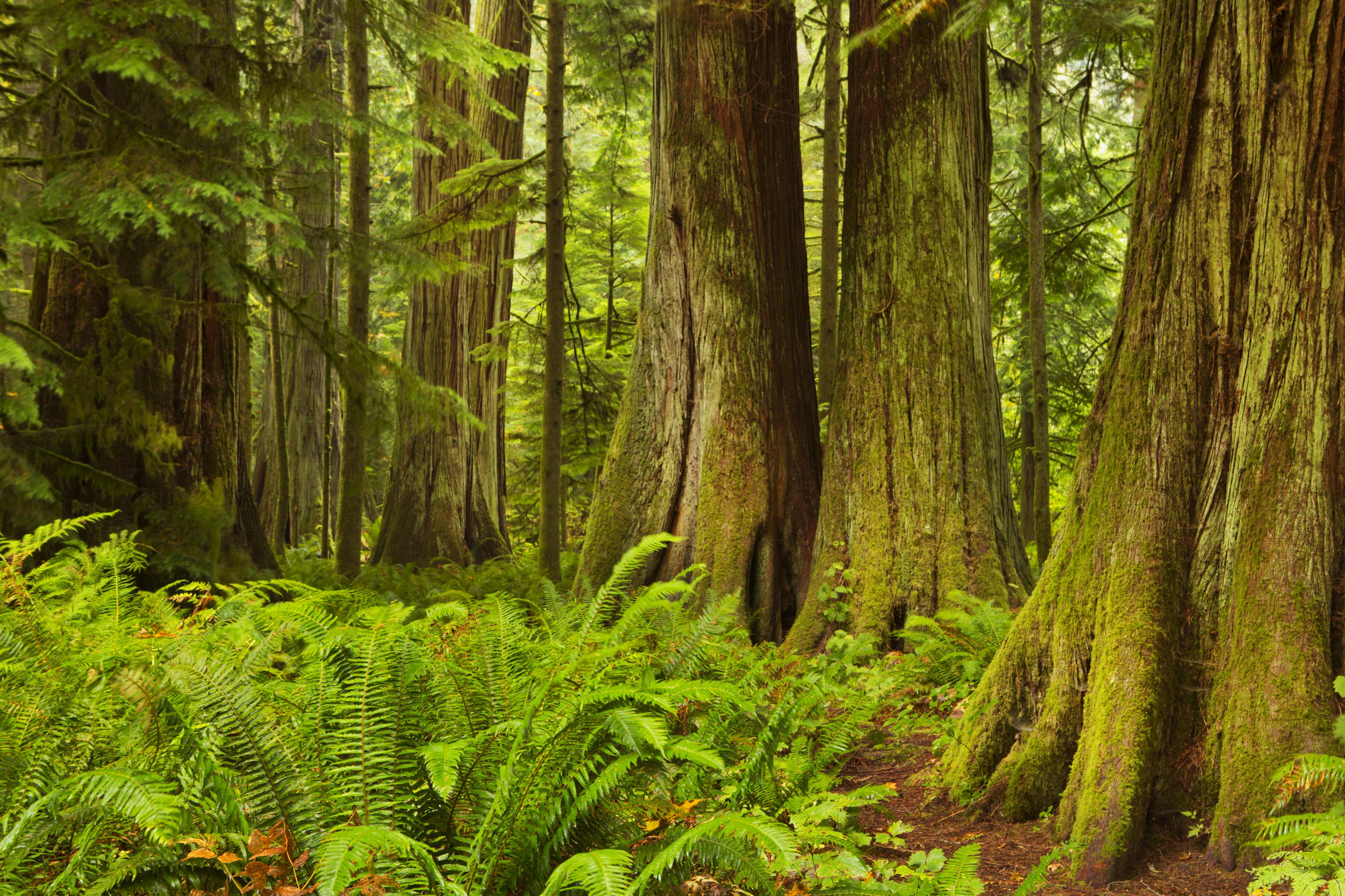 vast, majestic coastal forest, which covers 1.8% of Canada’s forest terrain. Here, rainfall is very abundant and humidity is constantly high, so the trees thrive, not bothered by the stress that often comes with drought. Canada’s coastal forest mainly comprises conifers: western hemlock, yellow cypress, giant cedar, Douglas fir, Pacific silver fir and Sitka spruce. The stands reach up to 70 meters tall and the cover is very dense, so not all plant life thrives as the light does not get through easily. However, these ancient forests harbor a rare, protected ecosystem.

There are few natural disasters such as storms, high winds or forest fires in the coastal forest with its tight, humid cover. A large number of forest lots have thus remained intact for hundreds of years and the coastal forests are thus ancient, with some trees over 1,000 years old.

Canada’s tallest standing tree is a  Sitka spruce known as the ‘  Carmanah Giant ‘. It is found in the coastal rain forest and stand some 95.8 m tall. Half of Canada’s coastal forest is made up of ancient forest with very few deciduous species. Conifers reign here.

When you are looking to buy a forest in British Colombia, you should be aware that forestry is the biggest industry in the province. The forest covers 60% of the territory, including a small part on the coast, but this coastal forest is much sought-after and, given the quality of its trees, undergoes logging.

For centuries, native populations have enjoyed very close ties with the coastal forest and people still depend on it today. To build their homes, make tools, clothes and to gather medicinal plants... the coastal forest harbors a wealth of resources. When the Europeans arrived, they began logging the extremely fertile forest lands. The forestry business began to boom. There was keen interest in the commercial value of the trees in the coastal forest.

The sheer size of the tall cedars and the Douglas firs, plus the ease of access and timber quality made the province world leader for the supply of forestry products. A bonus for anyone looking to buy a forest in British Colombia!

Buying a forest in British Colombia also means awareness of the presence of a protected ecosystem.

Here, 19.5% of woodlots are logged, but they rare highly profitable. The large forestry firms naturally run operations in this coastal region of Canada, where trade is facilitated. Forestry products is the province’s biggest export so the forestry business is thriving.

The coastal forest is clearly the most productive of all Canada’s forests today. Forestry thus plays a crucial role in the region’s economy. 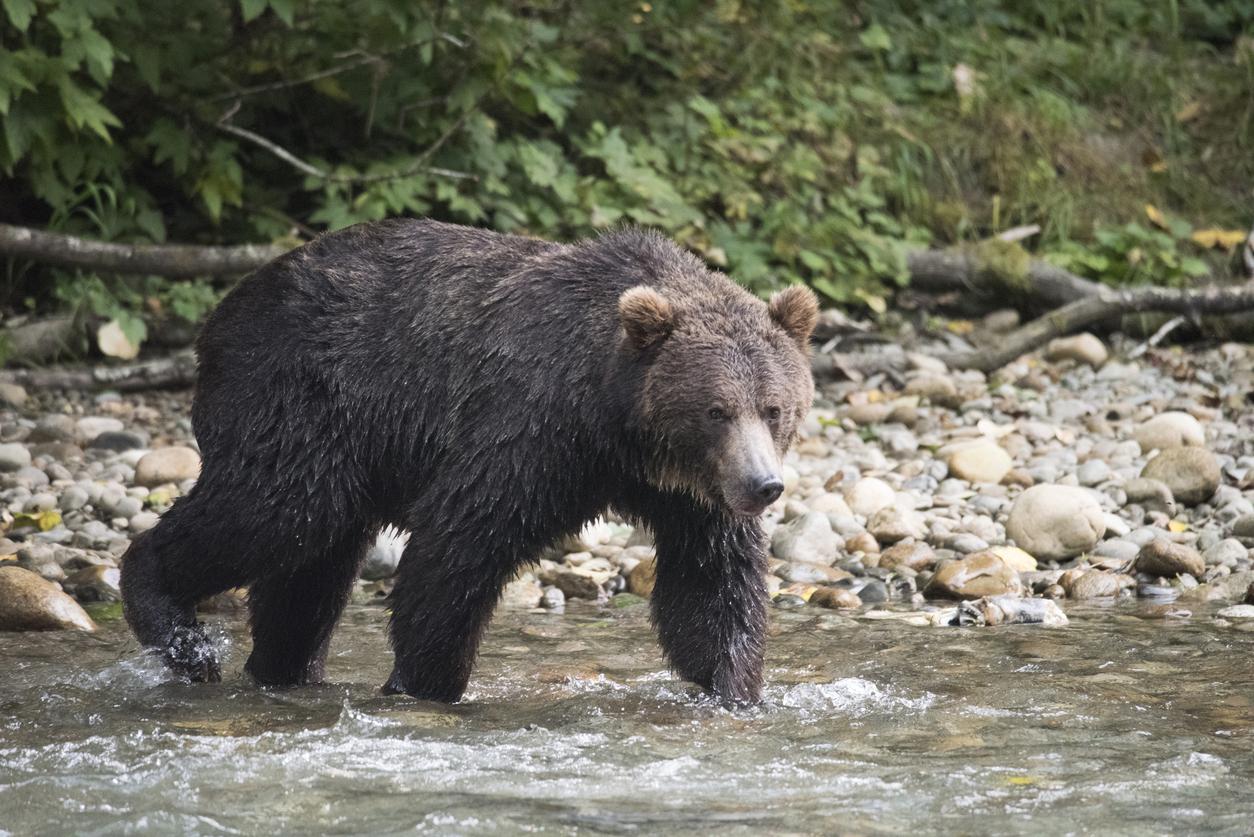 Buying a forest in British Colombia also means awareness of the presence of a protected ecosystem, especially in the coastal forest.

These woodlands increasingly require protection for species such as the grizzly and the barred owl. In fact, the coastal forest is made up of numerous national and regional parks.

Helicopters are frequently used for hauling trees, which are carefully selected so as not to damage areas on the ground which are home to some very dense fauna and flora. Something to be kept in mind when you are looking to buy a forest in British Colombia.

There are 570 000 km² of forest in British Colombia. Only 5% comprise private woodlots, which means 30,000 km² of private forest across the province. Buying a forest in British Colombia therefore requires advice from experts who are well-informed about the local forestry economy and the possible transactions. The coastal forest only accounts for a small portion of the province’s forest cover, so you will definitely need expert help when buying a woodlot in this type of forest.

The woodlots here are mainly publicly owned. There are 220,000 square kilometers of public forest land subject to forest management agreements, as the province's public lands (as is the case in the rest of Canada) are Crown lands but are mostly managed by large forest groups.

Exports to the United States, Japan and China are huge. In 2016, British Columbia's export of forest products was worth $19.96 billion, making the province the world's largest exporter of softwood lumber, an asset for anyone purchasing a forest in British Columbia.

However, it is important to take the requirements of environmentally friendly forestry into account, something that is promoted by the public authorities. Companies that manage forests on Canada's public lands must regenerate them to restore their original natural diversity. When exploiting the forest for lumber in Canada, forestry practices must also take into consideration ecological factors, the forest’s health, biodiversity and wildlife habitats. An unavoidable issue when you want to own a woodlot in Canada’s coastal forest.

Huge trees, unique ecosystems, productive forests, large areas of wilderness are all the characteristic of Canada's coastal forests, which are truly outstanding.

The coastal forest is symbolic of Canada and is even considered a national treasure. Which is something to consider when buying a coastal forest.