The Colombia forest is found in British Colombia and Alberta in western Canada. It is a relatively small inland forest but can become very lush in the right meteorological conditions, with remarkable, dense vegetation. Conifers reign here and it is a profitable source of timber. In fact, significant revenues can be earned from the forests in this vegetation zone!

Covering 39,080 kmÂ², i.e. barely 1% of the Canadian forested area, the Columbia forest stretches from the valley bottoms up to the mountains (up to 1,200Â meters altitude).

Its very dense vegetation harbors some remarkable fauna and flora. Cranberries, Canada lily, various lichens, devilâ€™s club and white azalea are found in the lower mountain areas inhabited by grizzlies, caribou, mountain goats and wapitis, among a multitude of other species.

Logging operations are significant in this forest and regulated by strict provincial legislation. However, it is still possible to acquire a forest in British Colombia!

The Colombia forest grows in the mountain chains in the southeast of British Colombia and the southwest of Alberta. It lies 600Â km inland of the Pacific coast. The ultimate forest region!

Known as the wet belt or inland temperate rain forest, the Colombia forest is very rich and diverse, thanks to its climate. Moist air masses regularly move in eastwards from the coast, causing rainfall over the inland mountain chains. Summers are long and warm and winters are cool and damp, with average temperatures ranging from +14Â°C to -5Â°C in winter.

The Colombia forest is the only inland temperate rain forest in the world and sees most of its precipitation fall as snow and not rain as we go up in altitude.

Vegetation is dense and there are some large trees.

Conifers dominate and the timber is heavily traded, most of it as lumber. Most of the lumber sold by Canada comes from conifers such as spruce, pine, cedar and fir.

Buying a forest in British Colombia is a wise move given its geographic position and the quality of the wood, which can be exported, mainly as lumber.

There are 30,000Â km2 of private woodland in British Colombia, while the forest is entirely publicly-owned in Alberta. However, it is still exploited. Indeed, wood can be harvested on the Crownâ€™s land subject to certain conditions. There are 23.4 million hectares of public land in Alberta covered by forest agreements. The province of Alberta also has some specific afforestation standards.

There are two national parks within the Colombian forest: Mount Revelstoke and Glacier National Park. They receive special focus, particulary when it comes to the environment.

In this part of Canada, the relatively small Colombia forest is geographically limited. It is a vegetation zone that harbors some diverse, characteristic species.

Cedar and hemlock are found at low altitudes. In the riverside zone, white spruce is more common and in the lower mountain areas, we find Engelmann spruce and subalpine fir species. The latter two species are dominant. 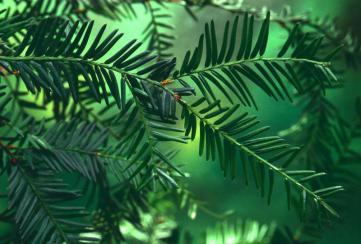 The higher up we go, the more difficult growth conditions become. The Pacific yew is one of the rare tree species able to adapt to these conditions.

It has a long lifespan and slow growth. It is one of the rare conifer species not to produce cones. Its seeds are instead protected by a red-colored husk, which looks like a berry.

Along the rivers in the valleys, the western balsam poplar can be seen alongside western red cedar and Engelmann spruce, the dominant species. In the forests to the south, we find western larch.

All of these species contribute to the vibrant forest economy. Buying a forest in British Colombia is a means of acquiring conifer species with some excellent logging opportunities. 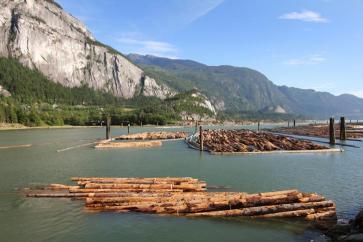 In British Colombia, the forest industry is significant and its activity is largely based on the Colombia forest. In fact, 92.6% of this forest is classed as productive, which is colossal! Wood production is very high, so there is a vibrant logging sector and timber market, especially as access is made easy thanks to a very well-maintained network of tracks. There are plenty of reasons to buy a forest in British Colombia!

Although the Colombia forest covers two provinces â€“ British Colombia and Alberta â€“ woodlots can only be bought in the former. The woodlands owned by the Crown in Alberta can still be exploited. There are 23.4 million hectares of public land there covered by forest agreements. However, Albertaâ€™s strict afforestation standards must be complied with.

This created jobs and generated a trade surplus in the forest product sector. When we learn that British Colombia produces half of all Canadaâ€™s lumber, we realize that there must be some very good logging possibilities. A vibrant forestry sector that is an integral part of the provinceâ€™s economy.

Hiking, hunting, climbing and fishing can all be enjoyed by the many visitors who come to the Colombia forest. Buying a forest in British Colombia also opens up some great leisure opportunities, including hunting. A forest region with multiple vocations...