On the triangular peninsula south of Ontario, the Carolinian forest stretches across the most southern part of Canada. Covering 550Â km of Ontarioâ€™s territory, it is the smallest forest type in the country.

Situated south of the forests of the Canadian north and south of the colorful mixed stands of the Great Lakesâ€“St. Lawrence forest, this forest type harbors a fascinatingly rich array of fauna and flora. The Carolinian forest is much sought-after by investors looking to buy woodland.

With close on 13 million inhabitants (almost 40% of the Canadian population), Ontario is Canadaâ€™s most densely populated province.

The population is mainly concentrated in the south of the province. The Carolinian forest stretches over 4,310kmÂ², which is barely 0.1% of Canadaâ€™s total forested surface area.

However, it is home to more animal and flower species than any other ecosystem in the country.

It is the preferred territory of the tulip poplar so the Carolinian forest is at its very best in spring when this species flowers. The beauty of the forests and the proximity of big cities like Toronto influence the sales price of woodlands here.

Perhaps the best word to describe the Carolinian forest is lush. It benefits from wet summers which are warm or even hot, and mild snowy winters with annual average temperatures between 8-9Â°C. An asset for the growth of some varied and rare species. The tulip poplar, renowned for the beauty of its flowers, is only found in this sector. Migratory birds, tropical cicadas, monarch butterflies and many other species are found among the most beautiful and rarest tree species in the country. 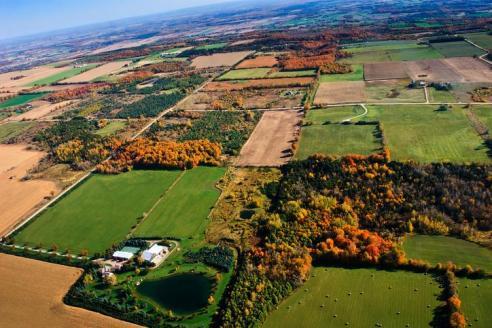 In this, the most southerly part of Canada, there are more rare or threatened species than in any other Canadian biozone. Biodiversity conservation policies encourage the reintroduction of the American elm and the American chestnut  Many red pine and Scots pine plantations were established in the early 20th century.

However, due to progression of farmland, vineyards and orchards, plus the very productive vegetable farms, the forest cover has fallen from 80% to 11% since last century, so the woodland is very fragmented. A lot of it is in private ownership so there is a lot of interest when a woodlot in the Carolinian forest goes on sale.

Buying a woodlot in the Carolinian forest

There is a lot of privately owned forest in southern Ontario, with figures exceeding the national average of 6% private ownership. In the province of Ontario, there are 169,000 owners sharing 70.4 million hectares of forest. 11% of the Ontario forest is thus private and is mainly located in the south of the province, largely dominated by deciduous species.

In Canada as a whole, the private woodland is 80% owned by rural families with the other 20% in the hands of private industrialists.

In Ontario however, the forest is mainly owned by industrial concerns. Only 12% is held by â€˜non-industrialâ€™ owners.  The surface area of each woodland is between 10 and 4,000Â hectares, with an average 28Â hectares. The private industrial forests on the coast and maritime provinces of Canada are among the most productive in the country. Output includes maple syrup, Christmas trees, walnuts and construction logs. This is a plus point when buying a woodlot in the Carolinian forest.

The geographic situation of the Carolinian forest, the quality and rarity of its species, some of which are protected, the quality of its soils and the favorable climate all contribute to the Carolinian forestâ€™s outstanding reputation. The proximity of cities like Toronto, Ottawa and London simply add to the appeal of this forest region, which is highly prized and subject to population pressure.

If you are thinking of buying a woodlot in the Carolinian forest, it is recommended you consult an experienced forestry consultant with in-depth knowledge of the area. 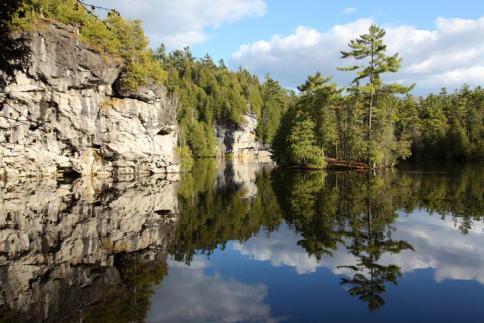 Another factor that needs bearing in mind: the forestâ€™s conservation status The owners of woodlots in the forest region of southern Ontario work closely with conservation agencies.

There is also a Managed Forest Tax Incentive Program (MFTIP) that enables a reduced-rate land tax for landowners who draw up and implement a management plan for their forest. If you are buying a woodlot in the Carolinian forest, either from a private owner (from the rural or industrial sector) or from the Crown (public forests that can go on sale or come up for lease), you will need to take into account geographic, demographic and environmental data so that you can implement a silvicultural approach that respects the environment but retains the productive, profitable objective that you would expect from this kind of investment.

An extraordinary variety of species 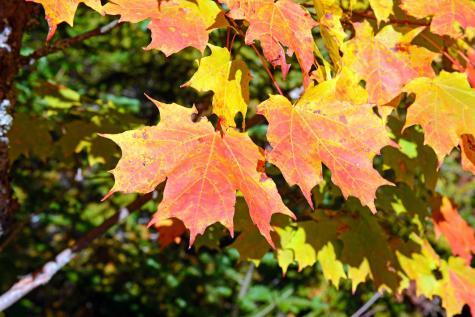 The Carolinian forest has very few conifers. Here deciduous trees reign, with oak, hickory, ash, chestnut, walnut, sugar maple, silver maple, sassafras, tulip poplar and beech. The forest is home to some of the finest trees found in Ontario or indeed in Canada.

In all, 70 tree species and 220 plant species grow alongside the 7Â million people who live here (25% of the Canadian population) â€“ thatâ€™s a lot for such a small territory! The beauty of the landscapes and the pleasant climate in this, the most southerly region of Canada, can no doubt help explain this. The local population, who are particularly fond of the colorful provinceâ€™s gentle lifestyle, confirms the areaâ€™s appeal.

A woodlot that is subject to much attention

According to the coalition â€˜Carolinian Canadaâ€™, there are more rare or threatened species in the Carolinian forest than in any other Canadian biozone. The institutions are therefore gradually introducing awareness-raising programs and management methods to restore the ancient forests. Woodland owners are also encouraged to recreate the conditions that were found in this type of forest before the arrival of the Europeans.

The most southerly of the Canadian forests can be vulnerable. Because its geographic situation benefits from mild temperatures favorable to the growth of exceptional species and because the soils are rich, there is a great temptation to exploit these woodlands.  Your Canadian woodlot deserves better care!