Poplar is recognized by: 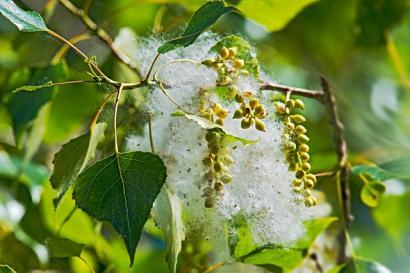 Definition of a forest site:
zone of varying size across which ecological conditions are the same: climate, relief, geology, soil and natural vegetation.

Requires an average 700-1,200Â mm rainfall per year. Needs a lot of water but does not tolerate waterlogging. Sensitive to frost.

The poplar mainly likes riverside forests where its preferred characteristics can all be found. It likes light, well-aired, deep, cool, neutral soils. Despite its strong attraction to water, it is strongly recommended not to plant poplars in marshlands. Prefer alluvial plains instead.

Root development of the poplar

N.B. Poplars are planted as sets, i.e. stems without roots.

Poplar cultivation involves the planting of clones or cultivars.

Clones are all the genetically identical individuals produced from the multiplication of a single original specimen. A close becomes a cultivar once it goes on the market.
There are more than 145 cultivars, 17 of which are eligible for State aid in France.

In poplar cultivation, it is useful or indeed necessary to mix several cultivars to create a stand, firstly to ensure production and meet the population ecological requirements of each clone, and secondly to withstand diseases. To ward off disease, a single cultivar will be planted over a maximum 2-3 hectares.

The clone or cultivar method is used when planting poplars to ensure (depending on cross-breeding) that the descendance inherits the physical characteristics of its progenitors and the disease-resistance of each one of them.

The aim is thus to create stronger individuals that are as profitable as possible.

Growth and production of Poplar

The poplar is one of the most productive species in France and provides wood all year round to different stakeholders in the forest/timber sector.
In fact, all of its wood can be used in one way or another. Its various qualities are put to good use and it is increasingly worthwhile investing in a poplar forest.

The higher grades of wood will be used in construction or veneer and plywood; the rest is used for fuelwood, packaging or paper. The poplar is one of the leading suppliers of paper pulp in France.

Different clones are created to produce poplars that meet the varying requirements of the sector’s stakeholders. In addition, the production cycle is short and profitable (between 15-20 years depending on the clones and site). A real advantage that makes the purchase of a poplar forest a worthwhile investment.

The trees are sometimes used to consolidate river banks. Given all of this, the poplar is not likely to lose its key position in the French economy. The acquisition of a poplar forest is all the more appealing when we recall that France is the second largest producer in Europe, after Italy, and third largest in the world.

Poplar woods are being planted increasingly often in France.
However, the latest trends indicate a shortage within the next ten years, given the high demand and a plantation rate that remains too low. If this trend is confirmed, the purchase of a poplar forest is a very wise move.